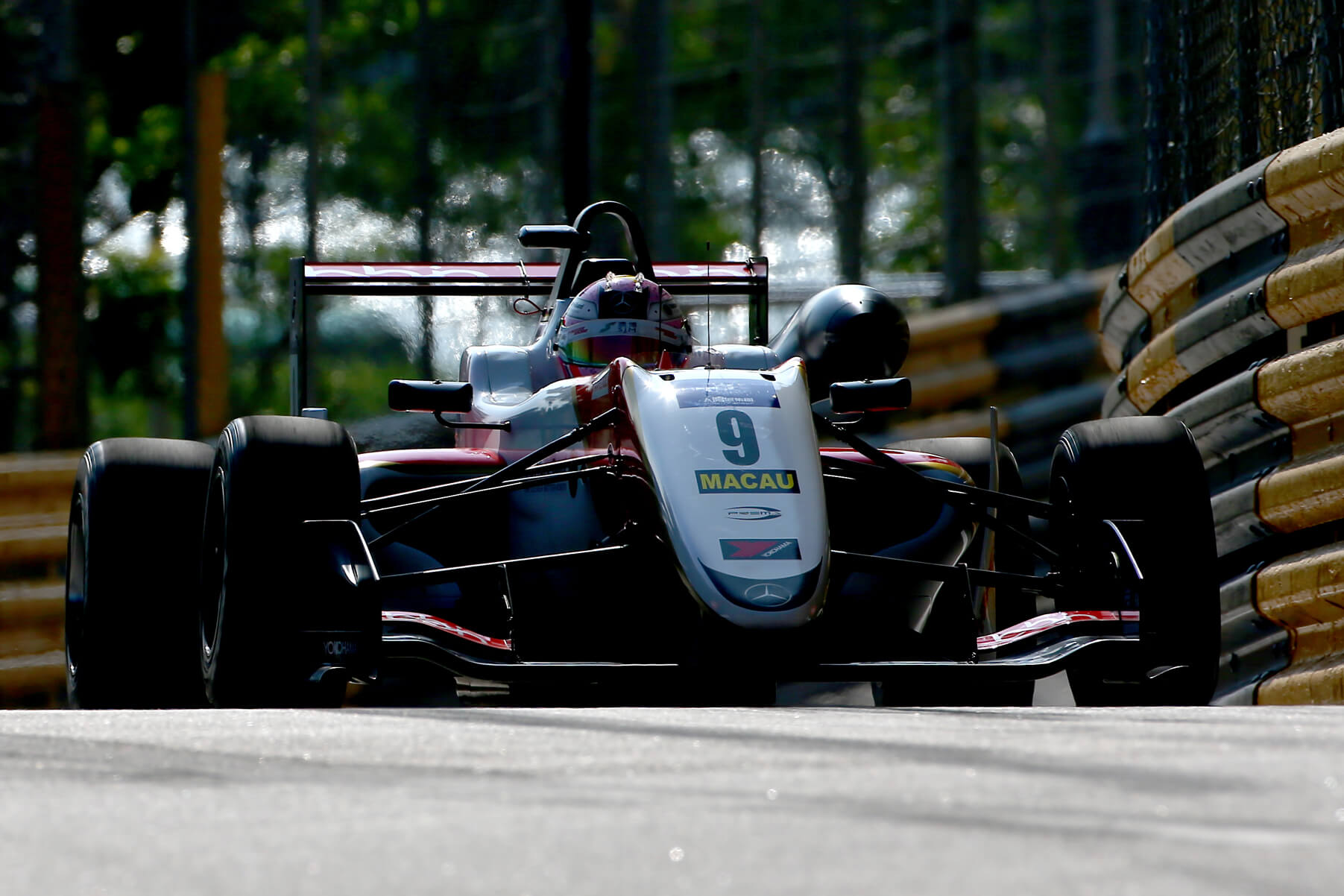 Maximilian Günther secured fifth place in a memorable 64th F3 World Cup in Macau. He was in second position after ten of 15 laps and on target to achieve the first victory for a German driver since 1995.

Despite an error-free weekend and strong pace in every session, 20-year-old Günther was denied the win in the prestigious race. His tyres were the reason for that, as they degraded badly, making it difficult for him to launch further attacks on the race leader during the dying stages of the race as he struggled to maintain position.

He subsequently dropped back from P3 to P6 on the penultimate lap but went up into fifth place when the two drivers in the lead crashed out just before the end. Günther was only 2.7 seconds adrift of the podium.

Having finished third overall in the 2017 FIA Formula 3 European Championship, he impressed throughout with his consistency at the highest level during a Macau F3 weekend marked by many smashes. Günther qualified in fourth place in a 22-strong field made up of the world’s best Formula 3 drivers. The SJM Theodore Racing by Prema driver also finished fourth in Saturday’s race against the clock.

The F3 World Cup in Macau is one of the world’s most important Formula 3 races. Formula 1 legends like Michael Schumacher and Ayrton Senna have been among previous winners in the past. This was Günther’s second time out at the 6.12-km Guia street circuit after lining up there in 2016. Despite his strong performance last year, he did not finish the main race due to an incident that was not of his making.

Max, what do you think of your fifth place in the F3 World Cup in Macau 2017?
I obviously set myself the goal of winning on my second appearance in the F3 World Cup in Macau. I’m disappointed that it wasn’t enough in the end. I gave it my all to the very end and fought like a lion, but the tyres let me down, unfortunately. I suddenly had no grip whatsoever from one lap to the next – keeping the car on course on such a narrow track is a real feat in itself.

Tyres played a crucial role this weekend…
The makers have already acknowledged that they provided tyres of variable quality. Some worked great, others not at all. Ultimately, it was down to sheer luck whether you got a good or a bad set. Of the three sets we were given, only one worked well. As luck would have it, it was the first set that we used for first practices and the first qualifying session. Their pace was great. I had plenty of grip straightaway, and they hardly degraded at all.

So, your first impressions were quite positive. What happened next?
Things suddenly changed when we bolted on the second set. I was struggling with oversteer lap after lap and had no grip, so we adapted setup to suit. The fact that I finished fourth in both qualis was nothing short of a miracle in view of the tyre situation.

How did the main race go from your perspective?
We changed setup completely for understeer, and I altered my driving style in order to protect the rear tyres. Everything went great at the start. I quickly fought my way up into second place and kept putting pressure on the leader. I was on my way to victory during the entire first stint of the race, but my tyres suddenly fell off a cliff, and the problem that we were already aware of reared its head again. More than fifth place was not possible under these conditions. I can’t blame myself personally, because I tried everything and gave it my all.

Are you generally satisfied with your weekend in Macau?
I’m very satisfied with my performance, as I was among the front-runners in every session. However, that’s only small consolation in view of the problems with the tyres. Nevertheless, the F3 World Cup in Macau is and remains an incredible event and the track is quite unique. Many thanks also to my team, who gave it their all, just like me.